MARS: Paris is dead. Hockenberry and Helen are lovers. Achilles and Hector have joined forces against the gods while the gods fight amongst themselves. Mahnmut and Orphu discover the quantum energy they’ve been tracking emanates from Earth rather than Mars, and it’s about to destroy both worlds.

EARTH: Meanwhile, Odysseus travels with Harman and Ada, seeking an end to Setebos. Daeman travels alone, seeking the same end. And the voynix drop their pretense of servitude; humanity’s continued existence is precarious.

Dan Simmons juggles many plates in the concluding volume of this epic duology. I admit to being a little lost at times, and occasionally needing to trudge my way through chapter 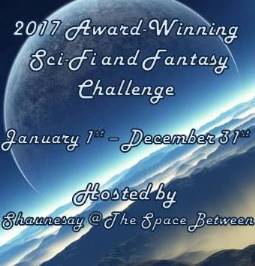 after chapter in dogged determination. Yeah, the story bogs down now and then. So many moving parts! But stick with it, and you’ll be rewarded in the end.

Read as part of the 2017 Award-Winning SF/Fantasy Challenge. Click that badge over there to see more reviews. And once there, consider joining us!

Mild mannered government employee and part-time actor, fiendishly obsessed with yarn, books, and Doctor Who, much to her husband's chagrin. View All Posts