The Essex Serpent by Sarah Perry

Cora, recently widowed — and frankly, quite pleased to be free of her marriage — decamps to the Essex countryside with her companion Martha and her son Frances for a change of scenery after her abusive husband is laid to rest. There she meets Will Ransome, the local vicar, and his angelic wife, Stella. Cora and Will immediately take to each other in an intellectual sense, debating matters of biology, naturalism, and faith with vigor and passion; Stella looks on in bemusement and a secret delight that Will has met someone his intellectual equal. Stella is ill, although she hasn’t told anyone; as the novel wears on, one suspects she doesn’t object to Will’s friendship with Cora because she expects Will to turn to Cora after Stella passes on.

In the meantime, Aldwinter (the village) is roiled by the rumor that the Essex Serpent of the title has resurfaced after an absence of some 200 years. Cora is thrilled at the story and believes the Serpent may be a prehistoric creature. Will believes the story is stuff and nonsense but is pleased church attendance is up. Still, he is unsettled by the reason: many in town believe the End Times may be at hand, or at the very least, God is unhappy with the town and is punishing them with this beast. The townsfolk are skittish and superstitious; they keep their children in and their livestock tied, and hold vigil at the edge of the river, watching for any sign of the creature so Aldwinter can be warned and ready.

As the year rolls by, passions rise and fall; quarrels come and go; people leave and return; letters are written and exchanged; the Serpent lurks; death stalks; love awaits; and peace, while elusive, is eventually found.

This 1981 BBC mini-series wasn’t what I intended to order from Netflix.  I had intended to order the 1962 B-movie starring Howard Keel, which I hadn’t seen since I was a teenager camped out in front of the television watching Bob Wilkins host Creature Features on Saturday afternoons.  So when the single-disc mini-series, comprised of six 26-minute episodes, arrived, I was somewhat puzzled until I looked at our Netflix account and realized “Oh, yeah, the 1962 film isn’t available, that’s why I got this one.” (IMDB indicates there’s yet another version, a two-part mini-series made in 2009, also British.)

No matter.  I watched it anyway, the day after I finished the book.  And the show is a faithful adaptation of its source material, with much of the dialogue coming straight out of the book.  It’s been updated so that it takes place in the early 1980s, so the chauvinism and sexism are somewhat lessened — omigosh, there’s an actual female who speaks from a position of authority — but the basics of the plot are fully intact.  I was fascinated by the depiction of the triffids in this version.  Keep in mind the only triffid I had ever seen on screen was that from the 1962 film — to the best of my recollection, they looked vaguely like walking asparagus with flailing “arms” and a kind of a dandelion-type “head”.  But the 1981 version looked a great deal like a titan arum, also known as a corpse flower. 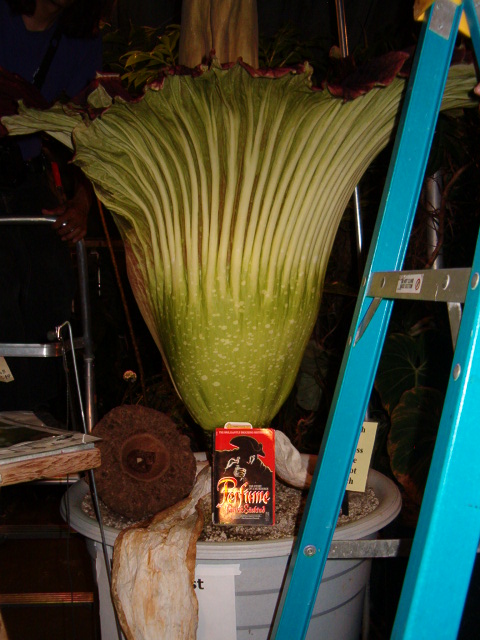 Here’s the titan arum my husband and I visited when it flowered at UC Davis in 2007. It’s huge. And it stinks.  Imagine this plant on a six-foot stalk, with the ability to walk — well, shuffle — and sting and eat carrion flesh.

I didn’t make the connection until seeing it on the screen, but that first episode, set in the hospital where Bill Masen awakens to a silent world, vividly reminded me of the first episode of The Walking Dead.  Same eerie quiet, same vacant streets, same desperate effort to find other living human beings and discover what happened.

So, set aside the cheesy early 80s fashion — sheesh, did we really wear our makeup like that? — and the horrendous videotape production quality so common in early 80s TV (on both sides of the Atlantic), and prepare yourself for about two and a half hours of post-apocalyptic fun and games, dodging deadly triffids and ruthless press gangs and militia groups intent on enforcing their version of law and order.

Reviewed for R.I.P XI “Peril on the Screen” Challenge.  Click the badge to find out more about this annual event.